Although I am extraordinarily exhausted, I’m going to sacrifice these prime sleeping moments in order to post.

Today was the end of the year school party. And it was awesome! I woke up at 6am to get moving to the work site pavillion, where the party was held. We decorated with ribbon and hand made signs that said things like “Congratulations!” and “Good Work!” You don’t have to tell me how creative and original I am; I figured it out after these first two signs. (That’s sarcasm, if identifying sarcasm isn’t one of your strong suits. Just saying.)

All in all, everything turned out to be a big success. The first student I saw when I arrived said, “Teacher, you look fly.” That’s one I have never gotten before, and one I still don’t understand the meaning of. The performances were great. We had a poem, a student serenade a random girl from the audience to Backstreet Boys “You’re my fire,” a raunchy Shakira Waka-Waka dance that had the boys hooting and hollering, and some other enjoyable songs and sketches. Valentin presented Jon, Liz, and I with plaques for our teaching and the three of us had to say a little something. About the speaking: first of all, there were a lot of people and I was kind of nervous. Second, I hate microphones. And third, my sick voice currently sounds like some sort of animals whose tail is being yanked while it is simultaneously kicked in the stomach. So I decided to go short and sweet and do it in Creole. Laughter and cheering pursued, and who knows if I said what I wanted to say or not. Following this, each class gave their teachers a gift and said a little something. It was all very sweet and I may or may not have cried. I won’t tell.

Liz, Jon, and I now have more Haitian souvenirs than we know what to do with. Pictures below.

A little dancing to end the party on an awesome note. I learned some new Haitian moves and pulled out some of my favorites: the sprinkler and the lawn mower, anyone?! You have to have fancy footwork to impress these Haitians, though. I’m working on it. Good times.

Lucky girl! Serenaded to Backstreet Boys. Didn’t he know that has been my dream since I was in diapers?

Wesnel, Wedson, Dukenson, and Mario (my students) sang a song that I think they wrote. I have to admit I couldn’t figure out exactly what they were singing. It was beautiful, though.

This speech, given by Casilet, could give a girl a huge head. (If you can see, the signs they are holding say “Beautiful”, “Wiser”, “Courageous”, “Patience”…I don’t know where they came up with these descriptors.) It was really sweet.

Valentin, Franck, Thaleran, Liz, me, Jon, Ganthier kazak (?) Reminded me of those high school sports banquets. This beats my 10th Grade “Most Enthusiastic Award” for Track by a mile. 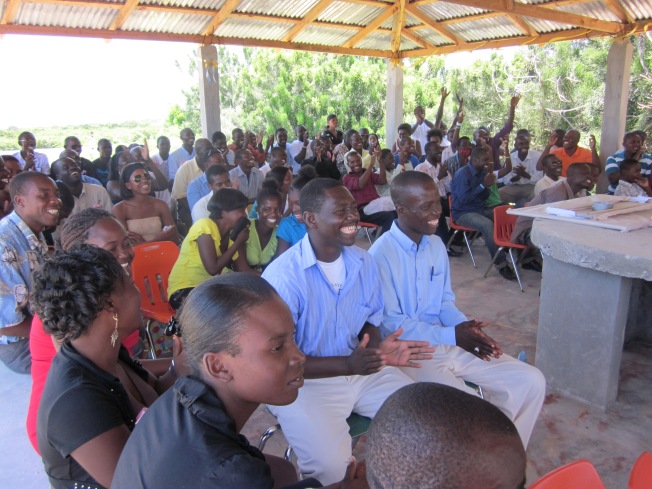 My new favorite picture! It makes me smile every time I look at it. I think it started out with one of my classes and ending up blending across teachers and languages.

Gifts from my students. Getting the giant picture home will require some brain work.

Ok. So after the party today, we rewarded ourselves a trip to Delimart for a hot steak sandwich (which came after the woman rolled her eyes at me about how long my order would take and some random dude tried to get me to buy into some inter-organizational pyramid scam and we embarrassed ourselves dancing to the bumpin’ music in the epi dor) and some quick shopping for necessities. Now, I must head off to sleep before we start another Sunday tap-tap death trap in the morning.